After what will now be known as the infamous Oil Pan Tragedy of 2017, I knew I needed some serious help. Much, much, much more serious.

My mom coincidentally found out that one of her co-workers, Evan, had a 1956 Ford truck. She was clearly very worried about me. She wouldn’t trust that I could fix all the problems on this truck myself safely, rightly so. She somehow got this poor soul to come over and check Betsy for any possible trouble spots while I was hiding in the desert crying about my transmission woes. I’m sure she bribed him with her gluten free cooking. From that moment on Evan knew he would be spending long weekends working on Betsy and he surly regretted ever saying yes to coming over that one fatefull day.

Luckily for me, Evan turned out to be the best truck dad ever. When we realized the engine Betsy came with was completely dead, he got on the ol’ Craiglist machine and started searching for any options that could be viable for Betsy. He scoured high and low, like some sort of internet bloodhound, and he found a straight 6 223 engine out of a 1959 Ford Galaxie that someone was selling in the San Fernando Valley for $300. Evan, being the hero that he is, pushed me to go for it. At the time I was considering dropping $1500 for an engine rebuild on the old engine. Somehow Evan knew that parting with $1500 wouldn’t happen so easily for me. He decided to offer me a deal, one I could not pass up. We went halfsies on the $300 ($150 from him, $150 from me) and if we dropped this engine into Betsy and it didn’t run, he would take the hit and have a new fun project on his hands. If it ran, I’d pony up the $150 and have a running engine in Betsy for a grand total of $300.

We met at my house early on a Saturday morning and set off in a rental Jeep Compass (Graciously provided by my step-dad), to the Valley. Once we got close to the promised land of I6 223 engines, I realized I had to stop by my bank to get the mullah. I missed the turn and we ended up behind a non descript office building. As if by magic, a bunch of old plywood that was carpeted on one side appeared behind the alley. It was meant to be. We quickly stuffed it in the back of that lame Compass and peeled out, pretending we had just robbed a bank.

We drove up to our destination and there was a lot of good signs. These dudes had that sweet little Galaxie sitting right out front of their huge garage. The pulled out the engine and it looked clean! It had a new oil pump, new Pertronix coil and distributor! Evan noticed that right away and knew we had scored a pretty great deal. Somehow we got it into that stubby Jeep Compass and headed back to Long Beach.

And they day was only just beginning!

Evan’s magical powers of summoning things just as when we need them were not done yet. We managed to get in touch with his buddy who had an engine lift which we needed to get the “new” engine out of the Compass, and the old engine out of Betsy. So we set off on another mini road trip to Huntington Beach in my mom’s RAV4 (or RAD4, more like) to procure that instrument of grace and precision.

We got back and we wrenched and wrenched. And then we wrenched some more. It got dark, and we continued to wrench. We finally got the engine out and called the day a win.

Betsy was completely hollow. I was terrified.

It was time to get even more dirty… 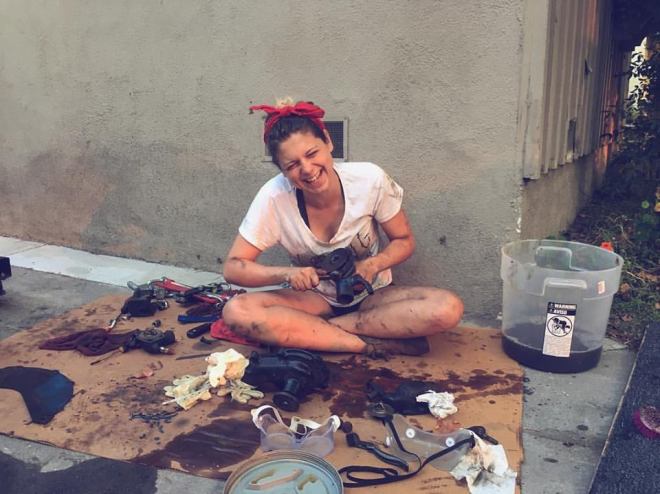